The city of Aalborg

WHAT KIND OF CITY IS AALBORG?

The regional city of Aalborg is situated in northern Jutland. With 126,556 inhabitants, Aalborg is our fourth largest city. It is located in the middle of the Limfjord - a shallow stretch of water which dissects the top of the Jutland peninsula from east to west. As a former industrial city, it has a tradition of daring to think big. This is demonstrated by the extensive renovation and expansion of the harbour front.

Our city is noticeably influenced by university life. We have a high percentage of youth housing, a thriving café life and pulsating nightlife. You will find young people from all over the world, making use of what the city has to offer every day.

Spectacular venues at the harbour front

Our city can pride itself on the superb Utzon Centre. The world-renowned architect Jørn Utzon designed the Utzon Centre together with his son, Kim Utzon. Jørn Utzon grew up in Aalborg and, symbolically, the centre became his last masterpiece before he died in November 2008 at the age of 90. The Utzon Centre was inaugurated in May 2008. Today, it is the harbour front’s meeting point. You can enjoy architecture, design, art, exhibitions and culinary experiences and participate in conferences and meetings. 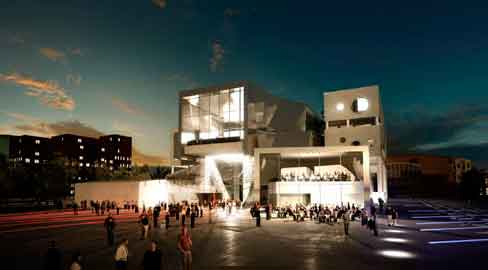 Building began on Musikkens Hus (the House of Music) on the harbour front in 2012. It will be home to professional musicians, a concert stage and an educational institution. The aim of the building is to promote music in northern Jutland. When it is finished, its architecture and many activities will help create synergy between the city’s inhabitants, its educational institutions and cultural centres.

Where else to enjoy life?

Concerts, music and cafés play an important role in Aalborg’s urban and cultural life. Concerts are held all over Aalborg, in Nordkraft, cafés, the student union and Skovdalen, a unique outdoor stage in the forest.

Only a few hundred yards from the beautiful harbour front, you will find Jomfru Ane Gade, a street with a multitude of music venues and cafés. The street is unique and friendly during the daytime and transforms into one big, vibrant party at night.

Like any large city, Aalborg has a wide variety of culinary tastes. We have everything from take-away to gourmet food. You can also enjoy hearty, traditional Danish dishes or modern Danish cuisine.

Transport in and around Aalborg

Aalborg Airport is situated approximately 6 km from the city centre. It is the third largest airport in Denmark and is rapidly expanding, continually adding destinations and numbers of departures.

Aalborg has an excellent system of public transport, both buses and trains. However, the bicycle is the preferred method of transport for many, and there are city bikes which you can use if you do not have your own bike.